Andra Day Picks up the Slack as Billie Holiday 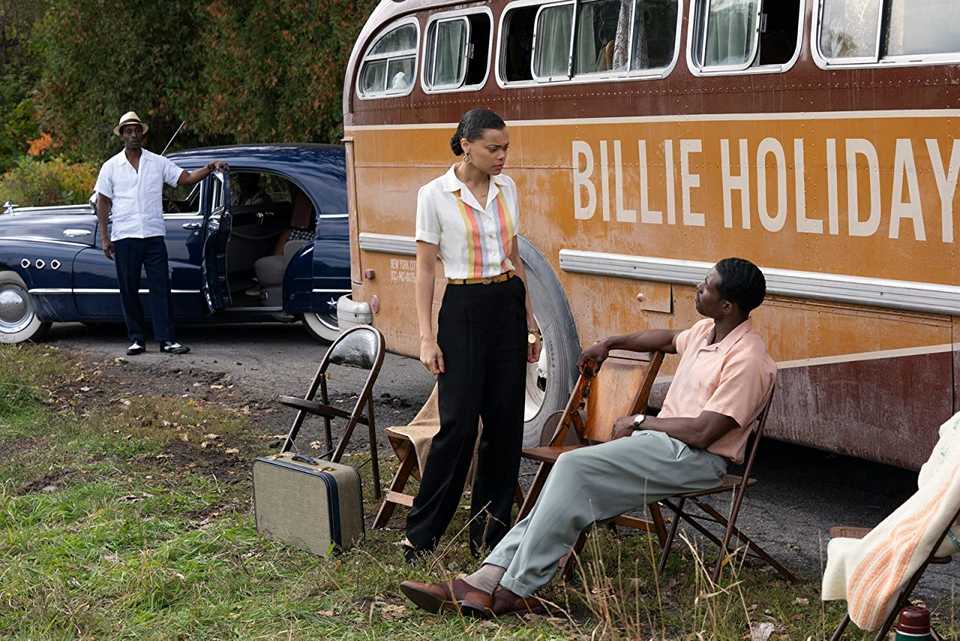 Bless the streaming services that finally get the movies I've been trying to watch for months. Hulu finally was able to provide the world with a viewing of The United States Vs. Billie Holiday and oh my, there's a lot to unpack.

First and foremost, I love Lee Daniels and his work. I think his construction of a film is some of the best work out there! As a massive fan of The Butler, this film was at the top of my list (especially after calling the Andra Day Golden Globe win, bragging intended @Hopster). So I want to preface this all by saying I am not hating on Lee Daniels. However, the first 40 or so minutes of this movie were erratic at best. It almost felt like a chopped together version of the movie it could've been; with so many moving pieces and no intermediary to explain anything beforehand, the movie just dives right into the central themes of the film. Amidst the erratic composition, it felt like there was too much Daniels wanted to tell about Holiday's life and tried to cram it all into the story, and sadly it feels as long as it is (2 hours 10 min).

I felt as though I was looking through a microscope but every 5 minutes had to start scrolling around to find that little thing I was looking for in the first place. Lee Daniels tries to cover so much in such a narrow scope it gets in its own way the whole time.

On the other hand, I am a firm believer in giving credit where credit is due, and I am giving all of the credit to Andra Day. She hands down puts together one of, if not the best performance of the year! Looking at one sequence in particular there's a part in the movie... well actually let me give a quick synopsis since I actually didn't know of this story in Billie Holiday's life before this movie.

Billie Holiday (Andra Day) has risen to fame, a lot in part due to her famous song "Strange Fruit". Which if you don't know, is about lynchings. But also not about a single one, about the all too common occurences of black people being lynched. Of course the U.S. government doesn't want her singing the song because J. Edgar Hoover believes it to be inciting a riot, or attempting to. In an attempt to silence Lady Day the government assigns Harry Anslinger, the commissioner of the Federal Bureau of Narcotics, to try and put her in prison for the rest of eternity due to her heroin addiction. The way in which Anslinger tries to accomplish this is through Agent Jimmy Fletcher (Trevante Rhodes), a black man whose entire purpose within the bureau is to get close to Billie and use that relationship to arrest her after she uses.

Ok so now that we are all on the same page, the sequence I'm referring to is when Billie and her band are on tour, with Jimmy following them, and while she's out walking comes across the site of a lynching. I can't even describe the scene and the reaction because it is unreal; a powerful and devastating reaction from Jimmy and Billie all leads to her performing "Strange Fruit" on stage. At this point in the film, the camera stays focused on Billie for almost the entire duration of the song, and it's in this moment you realize the grandeur of the performance you're watching.

Which leads me to my next question: how am I supposed to reconcile with award choices if Rami Malek gets awarded the Oscar for Best Actor by lip syncing and giving a rather bland performance in Bohemian Rhapsody (a bad movie people, get over it) and Andra Day doesn't? She won the Golden Globe, which is a great start, but we're talking about precedent here (an incredibly low bar to be exact). If Malek can get an Oscar for that performance, then there's no way, no way Andra Day is below that bar for her much more nuanced and dramatic portrayal of Billie Holiday. Not to mention if you think Malek was light years ahead of everyone for that performance, I think you just really like Queen music and that distracted you from everything wrong with that movie1.

As more of a footnote than anything but also a very important topic, we need to talk about how fucking hot Trevante Rhodes is. I don't think he's eaten a single carb since 2004, and it shows.

Not to mention seeing him in this film makes me want to watch Moonlight on repeat.

I guess I've been on a bit of a darker beer kick as of late, because I had this little treat lingering around in my fridge. Low and behold the weather was also cold and rainy when I watched this so a dark beer was just what the doctor ordered (insurance didn't cover it though). The Kulshan Brewing Fidalgo Coffee Milk Stout is a great staple to have in the world of milk stouts if that is up your alley. It was dark, flavorful, sweet, malty, and a nice warm finish to it that makes you feel good about your decisions for a moment.

And by that logic if you drink enough of these you should feel good about your decisions for longer, jk please drink responsibly.

This was also a collaboration brew with Fidalgo coffee so I'll have to try their coffee as well and see if its another staple in the coffee department!