The year is 2007 and you've just found your new favorite irreverent comedy show, "The Whitest Kids U Know." A comedy sketch show starring Timmy Williams, Trevor Moore, Zach Cregger, Sam Brown, and Darren Trumeter containing various shenangians ranging from Call of Duty interpretations, Abraham Lincoln being a rowdy play viewer, and playing with a nail gun gone wrong (what did you expect). Little did you know that spawning from this show running for 5 seasons until 2011 would be the writer and director of a 2022 film that blows just about everything else out of the water! That's right, Zach Cregger has come out swinging with a fantastic new film that not only keeps his comedy roots intact but also demonstrates some immaculate social commentary.

The film? None other than Barbarian.

Now, if you haven't heard anything about this film, or even if you have heard a little, I will say that going to see it knowing as little as possible results in the best possible viewing.

Therefore I will say, spoilers aplenty and if you need to turn back, watch the film, and then come read this, please do!

I'll give you some space before I dive in per usual.

Maybe even another kitten gif.

Alright let's get into this!

Barbarian, at its most basic core level, is a story about survival. Our protagonist Tess (Georgina Campbell) is visiting Detroit for a job interview when she finds out her Airbnb has been rented on the same dates by a complete stranger named Keith (Bill Skarsgård). We get our first taste of the main theme in these first 30 minutes, and its been bouncing around in my head since I saw the film! Tess is wary about entering a strange house with a stranger inside of it whereas Keith displays feelings of safety, comfort, and overall nonchalance about the situation. Attributing this to the male privilege Keith is afforded, Tess dives into how their simple exchanges have various dynamics depending on who you are. Tess has to look over her shoulder and actively think about her surroundings much more than Keith ever does or will. It's a passive and active habit that Tess brings up about being a woman, whereas Keith is able to travel and exist in a much more carefree manner, such as inviting a stranger into a house that he's residing in without so much as a second thought.

This theme rears its ugly head later on when Tess is begging Keith to leave the house with her when she finds a secret passageway in the basement. Keith, afforded a privilege of not having the same fear in these situations, decides to go into the passageway and see what it's all about. One thing leads to another and Keith doubles down on his adventurous machisimo, even as a seemingly nice guy, going into a subterranean lair that eventually spells his demise.

Over and over again Tess pleads her case to multiple men who either outright refuse to listen to her or rebuke her fear in favor of their own beliefs. Keith, AJ (Justin Long), and Andre (Jaymes Butler) meet untimely demises (except AJ, his was timely) as their hubris blinds them from seeing what Tess is talking about or the reasoning behind it. It's truly a deep dive into not only toxic masculinity but the passive behaviors men exhibit because they simply can and have.

Barbarian really is a fantastic vehicle to push these metaphors into light especially in an exciting and entertaining way. For example, let's look at the character of AJ. A prominent Hollywood star without a care in the world until a report comes out that he sexually assaulted his co-star in an upcoming TV show. Now strapped for cash AJ begins to try and sell his rental property, the one Tess and Keith were staying at. There's a great comedic bit with AJ finding the underground lair, and instead of being afraid of what dark secrets might lurk within he begins measuring every inch to add more square footage to the listing. This bit adds so many layers to not only to AJ but what the whole movie is about in the first place. Again, a male character finds this dungeon, subconsciously believes that nothing is wrong and they'll be fine, and carries about their business. It's a great wrinkle to the cliched horror tropes where characters go into a dangerous situation all the time and the audience is groaning for them to escape. On top of that AJ's ego and obvliviousness to his current situation come pouring out onto the screen in hilarious fashion. Not to mention Long's ability to portray such a detestable character in such a well rounded manner is nothing short of incredible. Just when you think there's a hint of redemption coming he goes back to his disgusting ways, culminating in the theater howling when his head implodes.

Cregger's comedic writing style helped push this film over the hump for me, and his direction was impeccable. Combined with the eery score from Anna Drubich everything falls into place and captivates the audience for the entire runtime.

Not too shabby for a debut film for Cregger!

Once more I'll mention going into this film knowing as little as possible is going to result in the best viewing. It may seem like a menial detail to some people or outright ridiculous to just go see a movie you don't know anything about, but the unexpected twists are what really make this film a true experience. Of course with any event where you're doing something you know nothing about you're a little nervous. What if this movie is actually terrible? Well lucky for us we have beer to quell those nerves and prepare you for an hour and 42 minutes of lunacy (in a good way).

What's even luckier for us is the availability of Boneyard Beer's Hop Venom imperial double IPA! This golden elixir packs a punch at 10% ABV, has the taste to back it up, but also provides a well rounded flavor profile that doesn't overwhelm any of the senses. While strong tasting there's an immaculate balance of hops and malt flavors that are having a grand ole time on your taste buds. Some subtle citrus and pine profiles sneak into the profile as well adding some nice depth to the mouthfeel and finish.

When traveling into the depths of the unknown its good to have some Hop Venom on hand to steel yourself and take the dive.

This isn't a metaphor for anything I just mean enjoy this beer before you see this movie. Please. 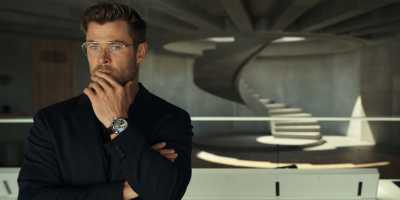