It sure has been a long time since I entered a movie theatre, about 1 year and 6 months in fact. The last time I walked through those doors was to see 1917, which is definitely one of my top theatre experiences of all time. One of my favorite things about going to an actual theatre instead of streaming is the previews! That's right! I was beyond excited to get just a little taste of some upcoming projects and real quick before I dive into The Green Knight (there's a lot to dive into) I'm just gonna highlight the most exciting trailers/projects that were screened.

Then of course there's always trailers for movies I couldn't possibly care less about, here are those things.

But to be honest the trailers aren't the main motivation for going to the theatre (duh) it was to get my beady little eyes on the movie I've been longing for. Since it was delayed over a year ago I've essentially been lying dormant. Hibernating patiently for the mere opportunity to see Dev Patel as Sir Gawain as he embarks on his quest.

If there's anyone that understands this time of waiting and pacing it's David Lowery. To be honest I think Lowery understands time and portraying it better on screen than anyone. Yeah that includes Christopher Nolan, Tenet still doesn't make any fucking sense don't @ me. Lowery's predecessor to The Green Knight, A Ghost Story, was a marvelous exhibition of a different temporal narrative intertwined with themes of mortality and loss. The Green Knight is no exception to this.

For those that are unaware The Green Knight is not necessarily an adaptation but an interpretation of the 14th century poem Sir Gawain and The Green Knight. The poem follows Sir Gawain, a knight of the round table and King Arthur's nephew, as he "joins" a game presented to him by a hulking green knight (hence the green knight). The game is as follows: Sir Gawain is able to strike the green knight once, any way he wants, at this time. Then a year from that time Sir Gawain must find the green knight and allow him to deliver that same strike. Of course what happens in between those strikes are what drive the conversation around the story and its meanings. The poem is written by an anonymous author and its true definitive meaning (if there ever was one) has been lost in the tides of time, leaving it all to speculation.

Therefore David Lowery can't possibly be wrong with anything he's presented in the film version of it. You can't be incorrect if there's no correct answer to begin with. This of course allowed him to really have some fun with the elements of Sir Gawain's journey.

Of course I'm going to try and avoid spoilers because this truly is a great thinking piece film. Watching it without knowledge of its middle or ending allows you to immerse yourself in the world presented to you, and all of its oddities.

First and foremost, before getting into the nitty gritty elements of the film that worked so well in my opinion I need to mention the score! What better way to be pulled into this cold yet colorful world of quests and honor than to have an impeccable score to narrate each and every movement. The moment where Gawain (Dev Patel) is bound by the scavenger (Barry Keoghan) and the camera rotates around to show a future where this is Gawain's tomb, the melancholic and ominous score pitches in to really get you to lean forward in your seat and pull you into the green deathpit. It truly is astounding how music can so easily and extremely enhance the viewing experience, and the score of The Green Knight does that and some.

It appears as though everyone agrees on the success of the film's score, but a majority of viewers have some negative feelings towards the pacing of the story. Of course this is no medieval epic war with bloodshed and action at every turn, but I can see how some people expected something different. However, I was incredibly pleased with how Lowery displayed his interpretation of the original material. This is an Arthurian quest in every facet, there are challenges and tests, even unexplainable things that are meant for you to raise an eyebrow (or two) at. Sure you can consider it a slow development and there's a lot of time spent on Gawain traversing the landscape but that is a central theme to the story at play. The brutal vastness of nature, the ever sprawling reach of green and all that it represents.

The Lady (Alicia Vikander) has a knockout monologue about the various meanings of the color green and its context not only in the film but in life itself. Pairing that with the arduous journey Gawain had been through up until that moment emphasizes every word that comes out of her mouth.

"Green is what is left after ardor dies"

Sure your quest is important, and your journey trying, but in the grand scheme of things you're going to be dead and there will be nothing but green that remains.

Speaking more on The Lady and Vikander's dual roles in the film, there's one extremely potent theme both in this film and the source material. That would be sex.

Lowery practically embeds every shot in this movie with straight up sex, and it is awesome. But in order to fully understand that you need to be aware of the role sex plays in the original poem.

When Sir Gawain arrives at the well placed manor of Lord Bertilak (Joel Edgerton), and this is fairly consistent between the movie and the poem, he offers Gawain a pact. Lord Bertilak will go out and hunt and bring back to Gawain whatever he is able to get, but in return Gawain must give the Lord what he receives while he's gone. This of course starts with the Lady (now this is only in the poem) giving Gawain incrementally more kisses while Lord Bertilak is hunting. Gawain in turn gives those kisses to the Lord when he returns, except for the third day when the Lady gives Gawain 3 kisses and a cloth sash of sorts that is meant to protect him. Gawain does not give the cloth to the Lord, essentially breaking the pact.

What am I getting at here?

Arthurian quests and tales are all rooted in chivalry and honor. A knight should honor a pact and follow their codes and what not. So in the film Gawain essentially embodies everything a knight isn't.

Super quick side note, in the poem Gawain is in fact a knight (hence Sir Gawain) but Lowery wanted to change that up a bit by not having him be a knight quite yet in the film!

He's kind of a deadbeat son that goes and parties and is trying to be a knight for King (Uncle) Arthur but can't seem to get his shit together. So alot of the shots of Gawain (and his body) on his adventure are to symbolize some form of sex or attraction/intimacy. The foreshadowing and symbolism of his blown knighthood and feeble effort to be chivalrous, which culminates in his final meeting with The Lady where instead of 3 kisses they share a little more intimate of a moment, and a lot messier. To end that The Lady simply says you're definitely not a knight.

With so much left to unfurl I definitely need another viewing at least to fully grasp all of the symbolism and pieces I missed. This is an incredibly dense movie, and if consumed along with the original material it only grows in its meaning and artistic representation. My favorite aspect of this film, and the poem itself, is that everyone gets something different out of it. Maybe you'll watch it and completely agree with some of my takes, maybe you'll think I'm full of shit and don't know what I'm talking about.

Both are completely acceptable. You can't be incorrect if there's no correct answer to begin with.

If you couldn't tell before, I was incredbly excited for this film. I was excited for it when the teaser first came out, what like 2 years ago? And then my excitement only increased when it got delayed, because loyalty.

For a film like this that I'm over the moon excited for I needed to have a beer ready to enjoy with it. A real make or break beer of sorts. And what better way to enjoy watching Dev Patel go through the treacheries of a grand natural landscape to face a hulking behemoth ready to decapitate him than with a beer that describes his journey. Or at least attempts to.

Therefore allow me to introduce the Noble Pursuit, a brewing collaboration between Yard House and New Belgium Brewing Company. Of course Gawain is on a noble pursuit for honor and becoming a knight, he's just kind of not doing that great of a job at it. However, the folks that brewed this beer did a great job and they might be on an even more noble pursuit, brewing beer.

This was a great tasting, high quality and bright IPA that had a great hoppy flavor but also contains some hint of agave which was wild. So not only do you get the citrus and hops of the IPA but also a nice lime and tequila vibe that joins in for some fun. It is a unique taste but not one that is lost on me.

Much like the unique film paired with it, both do a great job painting a vast picture of their components and then reel you in and put you in the thick of it. Just don't lose your head drinking this one. 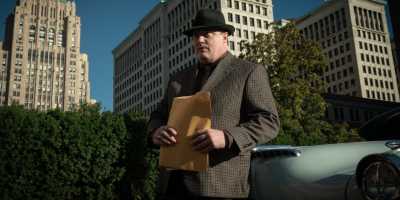