We've covered this before -- the Hollywood Foreign Press (HFPA) is a corrupt organization plagued by sexual assault and racist allegations, and the Golden Globes has weathered the cultural blacklash to a myriad of unethical behavior. Former winners have relinquished their trophies (see Tom Cruise's Golden Globes). Other film celebrities have sworn off their participation in this show. There's a moral quagmire in talking about the Golden Globes, but for what we're out to accomplish, it serves as a cultural bellwether for how the awards season might shake out. This list of nominees helps to capture what the year in film was and how the upcoming awards circuit might look. Let's keep this simple and play the hits, shall we? Let's review the nominees, complain about some haphazard nonsense and search for clues and takeaways.

Let's start this off on a good note. This pair of acting categories covers a lot of ground and is mostly in line with the list of contenders that pundits were expecting to complete this awards season. There is a strong representation from both Everything Everywhere All at Once and The Banshees of Inisherin, the former of which includes Brendan Gleeson (the current Oscar favorite). Angela Basset is also recognized, which is to expected -- her elegant work in Black Panther: Wakanda Forever has been the buzzing takeaway of the movie. There isn't much that I would change at this point, but there are always a few awesome supporting performances that get overlooked. This year, I would've looked to spread some love to Miles Teller for Top Gun: Maverick or Janelle Monáe for Glass Onion: A Knives Out Mystery. These are two very recognizable and more than worthy entertainers who played pivotal roles in two of the year's most essential movies and getting them in the mix would've only improved the mainstream spectrum of this category. Who doesn't want to see Monáe or Teller at an awards show? The HFPA should lean into its only strong suit: getting charismatic, hot, rich people to its show! Where's Keke Palmer and Chris Pine?! Brian Tyree Henry and Elizabeth Olsen?! Maybe these aren't the cream of the crop in terms of performances, but the ratings would benefit from their presence, don't you agree?

9) Minions: The Rise of Gru

I don't know if I have a true basis for thinking this, but this feels like one of the weakest crops of Animated films in recent memory. There's still plenty to like, but I don't see a slam dunk nominee for Disney or Pixar. Don't get me wrong, I really enjoyed Turning Red -- but it doesn't have the headliner cache of Encanto, Soul, Coco, or Frozen. As charming as Marcel the Shell with Shoes On is, I would bet Guillermo del Toro's Pinocchio will be the de facto headliner of this group. I mean, whenver del Toro has his name on a project, it comes with an assumed intrigue and awards momentum -- and look, his name literally on this one! But seriously, where the hell is Minions: The Rise of Gru?! Are people sick of these yellow gibberish dudes? Maybe -- this spin-off sequel is the fifth entry in the Despicable Me cannonical universe. I'll admit, I'm not anxiously awaiting the next Minions-related movie, but this movie was a big deal, right?? In a year the majority of films flopped at the box office, Minions: The Rise of Gru made almost a billion dollars at the box office. You'd think that would be enough to make it into the final five of this category out of respect alone. Guess not... The only other snub I would've liked to have seen make it is Apollo 10 1/2: A Space Age Childhood, which is one of Richard Linklater's once-every-eight-years animated excursion. Maybe Netflix didn't want to risk any vote splitting, because Linklater's project hasn't gotten a lot of press. But I thought it was a great watch and is a notable omission here.

It's too early in my pre-Oscars movie binge to have seen most of these movies, so I don't have a lot to offer in terms of cold hard analysis in this category. From what I've discerned, this is a pretty good mix of nominees to begin with, so maybe there isn't much to change? Decision to Leave and RRR are two high-profile international features that have had significant awards season traction already. Both RRR and All Quiet on the Western Front are streaming on Netflix, so it looks like they'll have an upper hand competing here. But maybe Return to Seoul, Saint Omer, or EO should be nominated instead of one of the other nominees? I've heard only good things about all three of those films, but then again, there's never enough room for all that international cinema has to offer in this category. Takeaway -- I'm excited to seek out all of these in the coming weeks.

Tough, competitive category -- though there are a few movies I haven't seen, there's no shortage of composing talent in amongst the five nominees. Burwell, Desplat, Guðnadóttir, and Hurwitz all have Oscars, and then there's John fcking Williams (ev'r heard of him?!). Not sure who I'd elect to bump (I don't know if I have the balls to weigh in on this until I get a few more movies under my belt), but I'm disappointed there wasn't room for Michael Giacchino and his work in the The Batman. Now maybe there's a general fatigue of recognizing prestige-y Batman movies, but this score is epic and and note perfect in echoing the gritty and meticulously crafted Caped Crusader flick that Matt Reeves and Robert Pattinson delivered early this year. Maybe this one got lost in the shuffle because it came out ten months ago, but this was top notch work from another presitigous composer.

This is another crowded field since the Globes don't parse out adapted and original screenplays into separate categories. Overall, the five nominees are representative of what you might see in March at the Oscars -- Field, Kwan/Scheinert, McDonagh, Polley, and Spielberg/Kusher all feel like plausible locks. If I was looking for a snub, I might look to Baumbach (White Noise) or Östlund (Triangle of Sadness) -- or maybe Rebecca Lenkiewicz's adaptation of the Jodi Kantor and Megan Twohey New York Times book, She Said, the investigative journalism story centered around the exposure of Harvey Weinstein and his history of abuse and sexual misconduct against women. Maria Schrader's meticiulous film hinges on a thorough and efficient adaptation, and what Lenkiewicz delivers is exacting, tonally spot-on.

Okay, we've finally encountered something truly unfortunate and unforgivable. In what bizarro universe is Todd Field not nominated for Best Director for Tár. Even if voters believed that the screenplay surpassed the direction in terms of which is the greater achievement, I'm left stupified. Field has such control over this movie and what he delivers is something between a full-fledged art film and an over-qualified, star-driven indie flick. There is way to reoncile this whiff. This is on par with when Villeneuve was not nominated for Best Director last year for Dune. Except maybe even worse.

Like we discussed with the supporting acting categories, the foremost emphasis should be around assembling Hollywood's brightest and mightiest. We can come up with a list of ten actors with lead performances that satisfy both critics Joe Lunchpail. I think this list of ten is totally satisfactory with a lot to like -- Butler in Elvis, Fraser in The Whale, and Farrell in Banshees represent the top 3 contenders as of today by my estimation. Seeing Diego Calva and Jeremy Pope get some love is awesome to see, and including Craig, Driver, and Fiennes is never a bad thing. However, if it were up to me, I would always try and make room for Chalamet, Kaluuya, and even Skarsgård (whose performance in The Northman doesn't hit the traditional marks of a great acting performance but is truly one of the best physical achievements on film that I've ever seen). Paul Mescal in Aftersun is absolutely one of the performances of the year, so him not being included is a big miss. But really, the major flub is not inviting Tom Cruise. C'mon, HFPA -- I understand that it would be awkward inviting him since he gave back his previously won Golden Globes. But you nominated Brendan Fraser, who swore he'd never return (and still might not). Nominating Cruise would've been worth it just see if he turned up, don't you think? I don't know (and I frankly don't care) if he deserves the accolades for this, but the more Top Gun: Maverick on this year's awards circuit, the better. Look for Farrell and either Butler or Fraser to win.

The drama category feels chalky in a good way -- Blanchett (who could run away with this from the jump), Colman, Davis, and Williams are proven, no brainers. Ana de Armas is a well-respected up-and-comer, though most people disliked (or maybe even hated) Blonde, so it was interesting to see her crash the party. On the flip side, the musical/comedy category has a lotttt of filler (Manville, Thompson, and even Taylor-Joy are unlikely to make it to Oscar night as of right now). Yeoh and Robbie are real contenders, but they benefit from fairly weak competition. The obvious snub for the leading actresses is Danielle Deadwyler for her incredible work in Till. She could easily have bumped de Armas, and I think it would be justified. Other snubs might include Kravitz, Lawrence, Mara, and Swinton -- but Deadwyler's absense feels like the biggest miss. Blanchett and Yeoh feel like the two to beat, but I hope Deadwyler gets into the mix.

Hmmm, this is a real right down the middle crop of films, isn't it? Avatar: The Way of Water and *Top Gun: Maverick are blockbusters, Luhrmann's Elvis and Spielberg's The Fabelmans feel engineered to compete at this sort of awards show, and Tár truly was one of the best films of the year. For me, the obvious snub here is Sarah Polley's Women Talking, which though I have not seen, has all the markings of an extremely accomplished and worthy contending drama. Slotting that in and swapping out Elvis feels like a no-brainer to me. Aftersun and The Woman King deserve some love, too. Hard to know who to bet on -- in fact, I have no idea as of right now.

Here's a wild idea -- try and nominate what might be the best film of the year!!! I'm obviously biased, but maaaaan Jordan Peele's Nope did not get enough recognition among this year's nominees. It's absense in this category in particular is staggering. While it is not solely a comedy, there are enough laughs sprinkled throughout Nope that it would absolutely qualify. Of all the possible snubs, this is the snubbiest. This is a more competitive category than in recent years, but I'm confident there's some wiggle room. The inclusion of Babylon here feels like a stretch, but then again, Elvis not qualifying as a musical is confusing, too. Additionally, comedy/sort of dark humor Barbarian might've been at home in this category, as well as the right-down-the-center comedy The Lost City (getting Channing Tatum and Sandra Bullock to this show would've been hysterical). But not recognizing Jordan Peele is a mistake, especially in this category. Will I get over it? Nope. 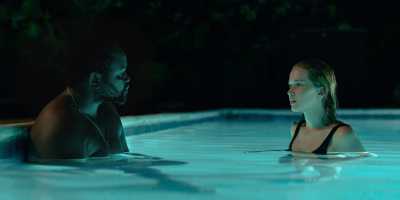