Three years ago Rian Johnson, fresh off the divisive as hell Star Wars: The Last Jedi blew audiences away with his fresh whodunnit mystery Knives Out. A dynamite cast of southern Daniel Craig, Michael Shannon, Lakeith Stanfeld, Jamie Lee Curtis, Ana De Armas, Toni Collette and so many more, came together with fantastic chemistry to propel Knives Out forward to a deal with Netflix and Johnson for multiple sequels. Johnson's ability to craft a whodunnit mystery with so many layers and complexities, along with compelling characters, makes for a downright entertaining time in the aforementioned film and now it's successor, Glass Onion.

One of the more refreshing parts of the film is the little to no reference to the events of Knives Out, making it a much stronger standalone film than traditional sequels. But in reality, that's because this isn't a sequel. Glass Onion is more in line with being a character study continuation of Benoit Blanc and the exploits of his case cracking competencies.

Speaking of case cracking... Boy oh boy Rian Johnson served this one up on a platter for us. Everything about this film is sheer entertainment! Johnson's talent for drawing up a script with so many red herrings, twists and turns while also being easily consumable is astounding. Similar to the styling of Knives Out there's a couple of back and forths in time but nothing is ever out of sorts or confusing. The only real confusion comes from wondering what's going to happen next!

Another one of the great aspects of these Johnson whodunnits is how he writes his characters and who the hell he gets to play them. The list of actors I previously mentioned for Knives Out was wild to see play out on screen but then Johnson has the audacity to one up his own casting with his own follow up film!? Seriously, casting Kathryn Hahn as a soccer mom turned Governor, Leslie Odom Jr. as the brilliant scientist working for Edward Norton as an Elon Musk inspired snobby tech billionaire, Dave Bautista as a men's rights activist, and Kate Hudson as the dumb, rich and effortlessly racist model is an unbelievable step up from his incredibly high bar from Knives Out. Not to mention, Craig's Benoit Blanc is as fantastic as ever along with Janelle Monáe, really diving into a different character than what she's played prior in her career, round out a compelling and captivating cast.

Similar to Knives Out there's underlying themes excoriating the lifestyle and actions of the super rich, but this time there's a directed blast to the wealthy's behavior during the pandemic. With the film starting out during the pandemic we see each character wearing a mask but we also see how exactly rich and powerful people either don't give a shit, or have ways to skirt around a public health crisis. Birdie (Hudson) is having an outrageous party in her home with more things happening on screen than you can get your eyes on. There's flame twirling, games, drinking, and oh so many people that when Birdie exclaims "I'm so bored" you can't help but laugh in disbelief. This was the same energy as when people like Ellen DeGeneres, Sam Smith, and Madonna were all posting videos of them crying during COVID lockdowns, wiping their tears away with fresh $100 bills on the steps of their multi-million dollar mansions. Meanwhile Benoit Blanc is smoking a cigar in a bathtub playing Among Us with Kareem Abdul Jabar and I'm on day 39 of wearing the same sweats in my 400 square foot studio apartment.

But its these moments of absurdity that set the tone that Johnson achieves, with Birdie being the comic relief and then Miles Bron (Norton) being the rich and powerful ringleader. Bron is a caricature of the mega-rich and their self involved nature. Having what appears to be a cure to the pandemic, applied by a hilarious cameo Ethan Hawke, just available for his friends so they can come party on his island with him is the epitome of rich self perservation. There's numerous other examples of how Bron exemplifies the problems of multi-billionaires and thinking you're God's gift to humanity, all so well packaged in a gratifying mystery film.

Thus we get to the title and its meaning, Glass Onion. Bron's special location on his private island is dubbed "The Glass Onion" due to its giant glass structure, but the hollow interior is the main focus of the film. The structure, and the title, are representative of Bron and how his story links with that of Andi and Helen Brand (Monáe). Throughout the film we discover that Bron really isn't a mad genius, even the original idea for his company is a stolen plan from Andi. This combined with his flair for excess-spending on everything/anything, uttering made up words while trying to be this pseudo-intellectual result in a facade of having layers to his intelligence or persona. Thus we have ourselves, multiple glass onions! The structure, the title, and Bron himself! All outward displays of complexity and layers, but consisting of nothing other than a hollow interior.

It really is some wild scripting from Johnson, and the film unpacks it all at such a tremendous pacing it makes for a fantastic watch.

I loved the original, Knives Out, but if I were to feed into the frenzy of comparing the two films I would lean towards Glass Onion! The sophomore Benoit Blanc film is a fresh take that is funnier than the first but with all of the mystery, betrayal, and introspective character examination of the original!

One of the greatest parts of the film is how Bron can just about get anything he wants, such as having the Mona Lisa on loan from the Louvre. Hiding behind a massive glass vault, but with a 'killswitch' (ironically in a clown figurine), the DaVinci masterpiece is a casual reminder that the rules of society change depending on who you know and how much money you have. Pulling one of the world's most famous paintings and cultural mementos out of the vault and throwing it in your secret villain island lair feels like a side plot of Lex Luthor in a Superman film (Henry Cavill fans down bad right now).

Having the Mona Lisa on display for himself and his close friends helps punch home the finale of the film and also highlight Bron's selfishness along with his stupidity. In order to match this level of class I too needed to wrench something out of the vault to selfishly enjoy. Which of course brings me to my default brewery, Fremont Brewing, and their 2022 release of From The Vault. This barrel-aged cuvee is a concoction of some of their past releases, with the 2022 release consisting of:

Combining this suite of stouts results in an impossible-to-not-love, wonderfully rich symphony of tastes that felt as though I was drinking something brewed with water from the fountain of youth. The only proper recepticle for this high quality of beer is the Holy Grail straight out of Indiana Jones and the Last Crusade, but the right one, not the one that melts your face.

But quite honestly this is my top beer of the year thus far! An immaculate balance of 4 incredible stouts that play to each other's strengths as flavors of cinnamon, coconut, chocolate, caramel, maple syrup, along with some strong bourbon dance around your palate. Even if this sounds overly sweet, the balance really is something special and tastes amazing.

If you're going to watch Benoit Blanc bust another mystery wide open as Miles Bron pays for pulling the Mona Lisa out of the vault of the Louvre you may as well get something out of the vault too. And let's just say, this beer deserves to be in the Louvre! 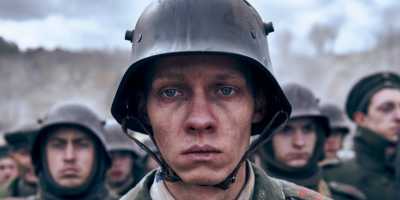