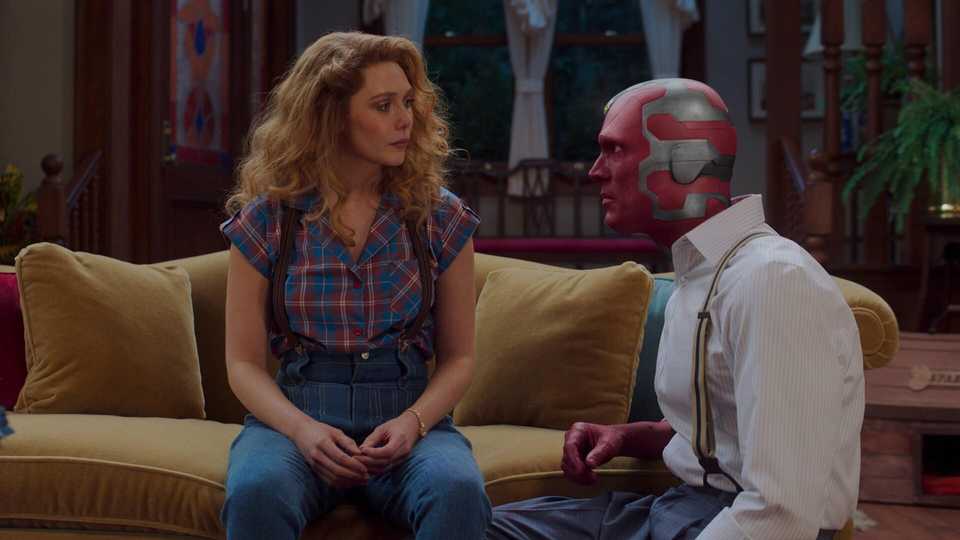 Should I even be doing a write-up on WandaVision? While it technically exists beyond the jurisidiction of our general Film & Froth domain, I'm going to make an exception. To be fair, there were more than enough moments during the show's later episodes to infer that Marvel might still prefer making movies as opposed to episodic television1. WandaVision was branded as a creatively weirder endeavor for the MCU, except the end result was something kitschy and tonally bland (relying on cross-generational jokes that wink through the camera and exhaustive universe-building aren't really an aesthetic or mission statement). It seems Marvel's endorphin-pumping-sequel-churning formula proved to be too rigid (and lucrative) to stray away from. Thusly, we're left with a few questions: Was it entertaining? Certainly, otherwise we wouldn't be talking about it at all. Was it engaging?? Sure, if you're wholly invested or barely invested in this stuff. But was it fulfilling??? As they say, it's hard to get full on breadcrumbs, especially if you were expecting a full loaf of bread2. Per usual with the MCU, it's just one breadcrumb after another, until you finally realize that you're never getting full on this meal, even though you're always coming back for seconds3. Regardless, I have some lingering bits to tid, some feelings to work through, some dirty laundry to air out. But I'll keep it brief from here; I'm tapping out at 200 words. Starting now.

WandaVision turned out to be a flickering bonfire emitting a shitload of smoke... something to hover around in the darkness despite feeling cold against its diminishing flame. By standing on the shoulders of past television nostalgia, the show had a headstart on style and could priotize substance, right? Nahhh. Rather than sending the titular female lead on a sobering odyssey through her irreparable trauma, she was relegated to embodying something even sadder: misogynistic grief. Wanda (Elizabeth Olson) gradually becomes the reckless "hysterical woman," unfit for her boundless power and only casually remorseful for her transgressions. She's characterized almost exclusively by her suffering... 1950s' sitcom matriarchs garnered more rumination! But why reckon with one's sorrow and regrets when you can get away with glossing over it? Any interim resolution is oversaturated with laborious exposition, incessant red herrings, and the obligatory third-act boom-pow fight sequence. We, the audience, have been conditioned to care about forthcoming cameos and Easter Eggs more than actual character psyche. How sad is that? If WandaVision was just another off-ramp that immediately merges back onto the Marvel freeway, then where the hell are we going? How can the ends justify the means if there really are no ends?

And that was 203 words. But whose counting?